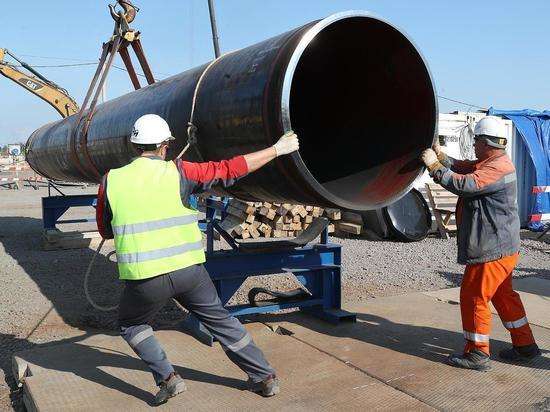 The pipe-laying barge Fortuna has already passed half the way to complete the construction of Nord Stream 2 in German waters. But the main danger for the Russian export pipeline project does not lie in the cold waters of the Baltic. New US sanctions may complicate the completion of the construction of Nord Stream 2 (SP-2), admitted the press secretary of the Russian President Dmitry Peskov. Nevertheless, he expressed confidence that Russia and European partners will complete the project. The pipeline, designed to deliver Russian gas to Germany bypassing Ukraine, has been under sanctions for a year now, which Washington plans to expand. “We have struck blow after blow, and now we are ready to drive a stake into the heart of the project “quoted by Reuters as one of the senior American officials. As Republican Senator Ted Cruz, a longtime and consistent opponent of SP-2, warns, the next batch of sanctions against the gas pipeline has been prepared “with surgical precision.” What kind of measures Washington is preparing against SP-2, and how terrible they are for the project, “MK” asked the experts.

Igor YUSHKOV, expert of the Financial University under the Government:

“What other“stake in the heart of the project”the Americans have in mind is not entirely clear. I do not think that they will have time to prepare and approve some new measures in a week. All this is documented, and it is impossible to introduce restrictions from scratch just like that. The corresponding bill is at a low start in the US, it is ready and passed by the Senate. These are the sanctions that have already been integrated into the law on the defense budget for 2021. In fact, there is nothing new and special there. We are talking about a ban on the construction of a gas pipeline, and this document contains more specific formulations than in last year’s sanctions package. For example, “it is forbidden to provide pipe layers”. The project itself will not be stopped because of this: Gazprom has already shown that it is not afraid of sanctions and intends to go all the way. However, the intrigue is that there are several more sanctions bills in the United States, which are in different stages of readiness. They already talk about a ban not on construction, but on the commissioning and maintenance of Nord Stream 2. And they are more likely to concern Europeans than Russia. “

“You can come up with different sanctions, but in reality we are talking about the fact that sanctions against SP-2 are again included in the draft US defense budget for 2021. The document was approved by Congress and the Senate, but it was not signed by the incumbent President Donald Trump, using his veto. However, the parliament can cancel the veto right: a vote on this issue in the House of Representatives is scheduled for December 28. As follows from the draft defense budget, companies that promote the sale, lease or provision of pipe layers, as well as firms that provide services and funds for the modernization or installation of equipment on such vessels, will fall under the sanctions. The document also imposes restrictions on the certification of equipment, works, and the pipeline itself. Without certification, construction work cannot be continued and the launch of SP-2 into operation is not possible. Previously, the main vessel for work in this area was called “Akademik Chersky”, but it was so unable to take part in the construction without the necessary permits. One way or another, to complete construction, any pipe layer needs to be certified, which may be hampered by new US sanctions. In autumn, the Norwegian certifying company Det Norske Veritas left the project without waiting for the official imposition of sanctions. Construction can be completed if the pipe-laying vessels (“Akademik Chersky” or another dedicated vessel) receive certificates for the work. But so far there is no information about the companies that can provide such documents. And at the moment this is seen as the main problem of the gas pipeline builders

“Probably, we can talk about the fact that not only commercial, but also non-commercial structures of the EU, including state institutions, will be subject to the restrictions. But no new sanctions against Nord Stream 2 for the project participants, Russia and Europe, will come as a surprise. This will not affect the fate of SP-2 in any way – the gas pipeline is being built, and from January 15, work begins on the most problematic Danish section. It is possible that Nord Stream 2 may not be commissioned in the first half of 2021, but only by the end of next year. But for Russia and Germany, this is not important, since the transit agreement with Ukraine is valid until 2025, respectively, it is not necessary to force the completion of the gas pipeline. “